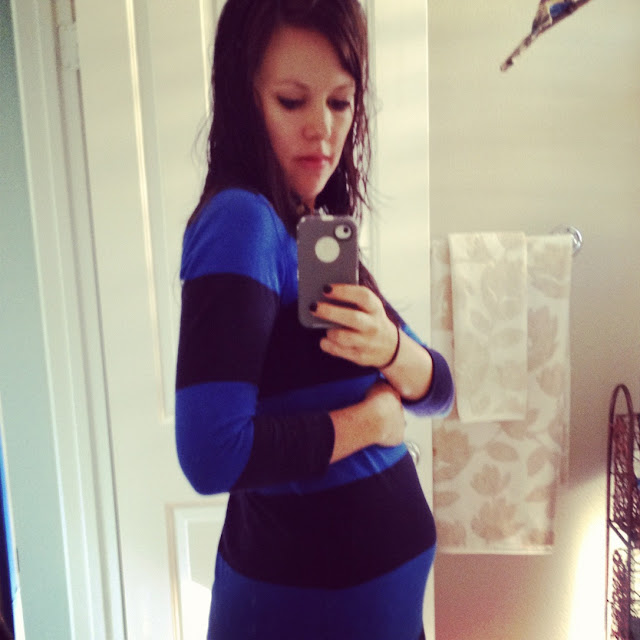 Half-way there!  That's alright with me.  HERE I am at 22 weeks with Jude; I have decided I carry so weird.  I had the same low, tent-like peak to my stomach last time.  Where's that cute, high, basketball that other ladies have (Annie Reynolds, I'm talking to you!)??

Disappointment in prego bump styles aside, things are good.  We had a healthy outcome from our ultrasound yesterday.  Jude decided that since Jeff was there, he could act twice as crazy.  My last OB's waiting room was more of a pausing room.  This new OB I sit there for 30 to 60 minutes wrangling Jude.  I think I'll go for afternoon appointments from now on and get a babysitter.

Also get this.  This will blow your mind.  Yesterday I was 20 weeks and 0 days but the baby was measuring 20 weeks and 3 days!  So maybe I only have 19 weeks left??

Craving french bread with cream cheese and fig jam.  Want to sit but can't.  Sleeping on one side.  Forgetful.  Cleaning like every wipe and scrub is a winning lottery ticket.  Always hot (although it's cooling off a bit outside!!!).  Haven't done anything with the nursery.  Can't wait to meet my baby and be a family of 4.  Until then, soaking it up with my one wild man Jude.
3 comments:

Email ThisBlogThis!Share to TwitterShare to FacebookShare to Pinterest
Not unlike Beebee Coming, Jude, Mama Mia

A Few Items of Business

Last week I was getting something out of the fridge in the garage, minding my own biz, talking to Jeff on the phone, when my stomach was forced to flip 43 times because I saw:

a black widow spider on its little web by the garage door.....and....wait for it....there was an EGG SACK on the web!!!!  It took me a few minutes to digest this fact and then decide if I was brave enough to take care of it by myself (verdict: not brave enough).  While I waited for Jeff to come home that afternoon and be the one to suck it up with the vacuum, I was tortured over whether or not the thousands of baby black widow spiders were ready to hatch and welcome themselves into the world, or more specifically, my garage.  Luckily they didn't, and Jeff came home ready to jump into action and really wanted to have our house sprayed but I talked him out of that one.  Anyway the black widow is dead and gone, and we are resting easy.

Tangled.  We saw a lot of that movie during Binky Detox, and that and Cars 2 are only shows we really watch (having had all I can take of Yo Gabba Gabba).  Usually we flip it on while we're waiting for Dad to come home in the evening or while we're greeting the day, breakfast, getting out of our jammies, etc.

Anyway.  I think Tangled is an adorable movie.  But just one question: did Flynn Rider have to cut her hair so short when he was essentially saving her life?  Couldn't he have left it shoulder-length or something?  She is stuck with the Meg Ryan a la You've Got Mail -- forever.  Sorry, Rapunzel.

And after I'd watched it the first time, I realized I couldn't remember all the details of the original Brothers Grimm version, mainly just that she has long hair and a prince comes to visit her by climbing it and there's a wicked witch.  So I looked it up on the source of all some summarized truth and was a little horrified.  Here's the gist:

- Husband and pregnant wife.  Pregnant wife is craving the Rapunzel root their neighbor (Mother Gothel) has growing in her yard.  Pregnant wife is apparently going to die without satisfying her craving so the husband steals it, and they get caught.  As penalty Mother Gothel gets ownership of the unborn baby.
- Mother Gothel and her adopted daughter Rapunzel go hide out in the tower for who knows what reason.  Mother Gothel only visits by night, so when the prince is wandering around and hears Rapunzel singing, and subsequently climbs her hair for a meet-and-greet, their daily companionship is able to grow to a secret love.
- Rapunzel is not the quickest whip so she accidentally lets it slip when she asks Mother Gothel why her dress is so tight at the waist (implying pregnancy!).  Mother Gothel chops off Rapunzel's braid, and kicks her out of the tower.  Note: in my cousin's human development class in college, she learned that most teenage pregnancies are conjured up during afternoons when both parents are working.  Truth rings here.
- When the prince comes for his usual visit, Mother Gothel drops down the braid she kept, he climbs it, she drops the bomb on the prince, and then pushes him out of the tower.  He falls into some rose bushes or something with thorns and is blinded.
- Later, these two lovers are just sort of meandering through the countryside, the prince hears her singing, they are reunited, she cries, her tears restore his sight, they return to the prince's castle and live happily ever after.

So what is the moral of the story?

1. Don't steal your neighbor's produce or from their garden in any way.  You could lose your firstborn.
2. No matter how dreary your life is, and how few people you get to associate with, don't give up your virtue, not even to a prince.  It will get your beautiful hair cut off and put you in a very difficult position.  If he loves you, he should remove you from the tower himself and make an honest woman out of you with a wedding (and why didn't he, anyway??).
3. Sometimes you are blessed with magical tear ducts.

And I had been wondering why Rapunzel had lost her magic hair but was able to revive Flynn Rider anyway.  Disney took that one from the original.

The moral to me is that the Brothers Grimm were a little dysfunctional.

Email ThisBlogThis!Share to TwitterShare to FacebookShare to Pinterest
Not unlike feature films, Jeffrey Effrey, stuff

At our house lately 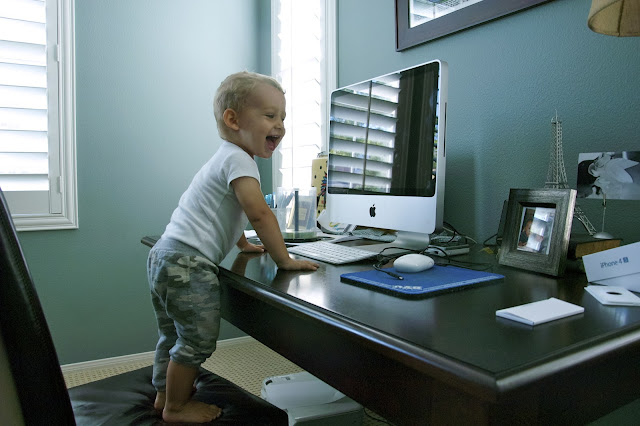 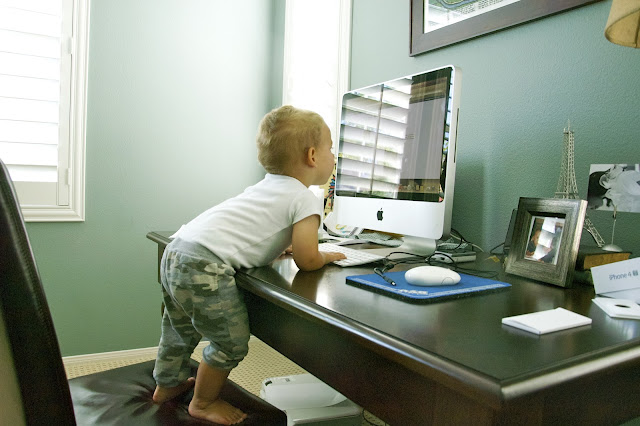 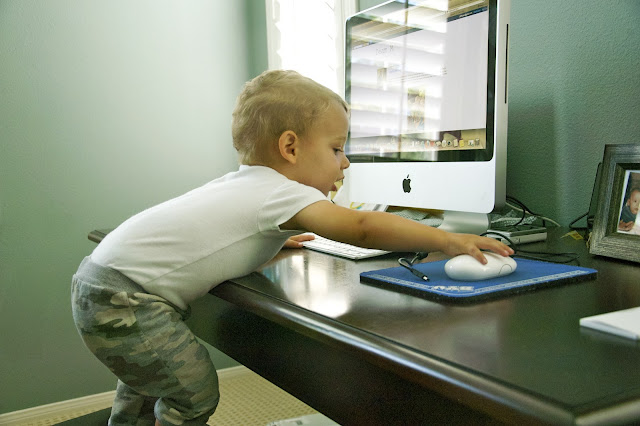 Email ThisBlogThis!Share to TwitterShare to FacebookShare to Pinterest
Not unlike Jeffrey Effrey, Jude, stuff

Jude's first 2-word sentence: "No, mom."  Sometimes he mixes it up a little with, "No-no, Mom."  I have traced an edge of condescension once or twice.  *Sigh* it begins.

Mostly, though, he is keeping me on my toes in a good way.  He insists on brushing his own teeth, sometimes allowing me to help as long as he's still holding it, he has started to put his own toys away (yippeeeee!), and makes "vroom vroom" noises while pushing his little toy cars around.  He is very particular about things being in their PLACE, and loves stacking and basically just arranging.  Very cute: instead of pitching his sippy across the room when he's done with it, lately (usually) he'll set it gingerly on the ground, standing upright.  I love it every time.

Since we nibble his toes, give him zerberts, tickle, and otherwise attack him 50 times a day, he's been doing it to us but doesn't get that soft biting is key. I know he's going to draw blood one of these days.  It's another one of those things I know he's doing just to be a part of the big kid group, and to copy us, so we don't want to smash that, either.  Herm.

Anyway, feast your eyes on our favorite:

It took from Saturday to Friday morning for my Jude to return from the fiery pits of Mordor (Binky Detox).

I just started writing more about that, but I'm not sure how far I want to dive back into this subject because, you know, it was a really dark week.  I wondered if my happy baby had possibly forgotten that he wanted the binky and only remembered that, in his mind, a terrible injustice had occurred, might never forget it, and thus he had morphed into a chronically grumpy toddler.  Anyway, I'm extremely grateful to say that although getting over his binky seemed overly drawn out and overly dramatic, my baby is back and I've learned more blood-sweat-and-tears lessons about parenthood.  Today while he was giving me kisses and zerberts and giggling for no apparent reason other than he's high on life and drug free, the birds were chirping and the sun was shining and I was feeling good and more relieved than I've felt about anything in a long time.

Because it was Saturday, it's a holiday weekend, and Jude was being a rock star, we did some really fun things like go to the Farmer's Market in Laguna, errands happened solo and altogether (going grocery shopping alone is such a thrill for me!), and then my parents came down to watch Jude, at which juncture Jeff and I excused ourselves for dinner and a movie.  High 5s all around.
1 comment: