It will be very interesting to see what happens to our neighborhood in the next few weeks. If people douse their houses in decorations this exuberantly for Halloween, I am excited and slightly terrified to see to what ends they will go for Christmas. And how early they will go there. Not that I'm complaining -- if I make it to the end of the week without busting out Sufjan Stevens' Christmas album, it will be an accomplishment. And to all the haters or people incredibly protective of Thanksgiving, I am so very thankful for Christmas. They go hand in hand, and I'm sticking to that.

Besides putting up a $5 lit pumpkin in the window (neighborhood disappointment), we haven't really done much for this holiday besides buying a 5 lb. bag of candy to shell out to the beggars tonight (now 4.5 lbs because we are fatties). There's always next year! Tomorrow I will be bee-lining to BabyGap to scope out the costumes on clearance.

Now for a weekend summary:

My assistant got married yesterday so I headed up to LA with my co-workers and dear friends Corinna, Maribel, and Ashlee for the ever-so-posh festivities. It was really a beautiful thing. 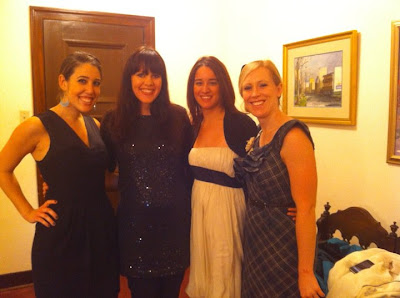 I really do love the people I work with.

I may or may not have had some stress overload meltdowns this week, and before I left at 2:30 p.m. for the wedding, Jeff was working hard to make sure I decompressed and had some non-stressful times. Then when I came back from the wedding at about 10:30, I was so charmed and softened to find he'd put a dinner for tomorrow in the crock pot, run my errands, and take care of a myriad of other things. Oh, he is such a winner.

And now the trick or treaters come...up and down for the next couple hours!

Email ThisBlogThis!Share to TwitterShare to FacebookShare to Pinterest
Not unlike holiday phun, Jeffrey Effrey

Quick update:
- We finished LOST last week. We don't know what to say besides "huh?" for so many reasons. I can't go further in the name of spoiler prevention. All in all, I don't regret the hours (and hours!) we spent watching it. I am satisfied, J. J. Abrams. And I haven't seen most of those actors in much else since, so I'm crossing my fingers they invested well/held onto their money for their sakes.
- My parents are in a "Kids -- get your crap out of the homestead" mode, and rightly so. It's time. Last Saturday Jeff and I helped them clear some of their stuff out, some of my stuff out, and they bequeathed some items in the process. Like the dresser and hutch that were in Sarah's room that nobody wanted. It needs a facelift. OMG -- DIY!!!! I wish this baby would hurry up and come so I could paint those wood chunks. Last night I removed the ugly hardware and tonight I might sand it. And then in February I'll be free to paint it...and then in March...or April...or May...or whenever I get out of baby hibernation mode, I'll finish it up and post AWESOME pictures of it. Stay tuned and on the edge of your seats!
- Eh, is it Christmas yet?
2 comments:

Email ThisBlogThis!Share to TwitterShare to FacebookShare to Pinterest
Not unlike Beebee Coming, Family, sometimes i decorate, tv 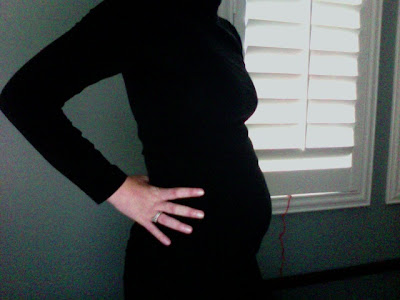 Email ThisBlogThis!Share to TwitterShare to FacebookShare to Pinterest
Not unlike Beebee Coming

I actually spend a lot of time thinking about this.

What will I watch while I'm stuck on a couch feeding a baby all. the. time.?????
In the bounty of advice I've started to receive, there is a common command: "Make sure you have things to watch on tv while you're nursing. TV can and will save you."
Here's my list:
- Mad Men
- Felicity
- Gilmore Girls Seasons 3 and 4 (which I've seen many times, but those are my favorites.)
- I'm asking for Pride and Prejudice for Christmas (Jeff: Keira Knightly version, please, Jennifer Ehle has mannerisms that drive me up the wall, blasphemous as that is to say). I don't think it would be right to steal my mom's copy.
And I think that's all I've got so far. Any suggestions?
In other sprightly news, we have been scoring some major deals on all things baby. We have generous family donating their no-longer-needed fabulousities (we feel the love!), and for pretty much everything else we've been scouring craigslist. Really, these are all huge blessings. We've found some great things in great shape. The latest huge blessing is our stroller. We picked it up last night from a craigslist seller who lives 0.7 miles away. I think I've said to Jeff every 20 minutes, "You know, I'm so excited about our stroller." A basically unused Britax stroller for a mini fraction of the retail price. It was the exact retired model we needed for our carseat (which my sister found for me on craigslist for 1/10th of the price) which was sold out on every on line distributer. Does anyone else think this is as interesting as me? Probably not, but I'm loving it. And I'm loving the cup holder on the side which will support and shelter my diet cokes. High 5! 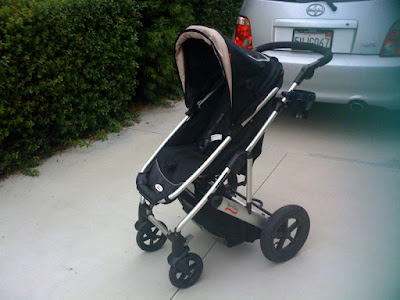 Email ThisBlogThis!Share to TwitterShare to FacebookShare to Pinterest
Not unlike Beebee Coming

I've bought so much of it pureed in 15 ounce can amounts, because ALL I WANT TO DO is stay at home and bake fattening things in sweats and slippers. I squeeze it in when I can. 2010 has been exhausting and it's not even over. But, exhausting with some pretty wonderful things. I'm hoping 2011 is more mellow or less eventful but given the fact that I'll be hopping on "the roller coaster you don't get off -- ever" (Motherhood according to Meri Eaton), that seems to be a far-fetched idea.
Praise where praise is due: we found our toilet downstairs was running inefficiently, thus contributing too generously to our water bill. Jeff began ripping it apart to fix it. Many, many trips to Home Depot. I started to think that in the end, after many more Home Depot receipts littered the counter, we'd still end up hiring a professional. And there's not any shame in that -- there's a reason I'm not designing cars or performing heart surgery or setting up cable. That is the reason of zero training. But, about one hour after suggesting we outsource, the toilet was back in working order. Zing! He'll never let me forget it, but I get to walk around knowing my husband can pull off stuff like that, so it all works out.
I swear the baby got bigger yesterday. Or I did. Either one. In other pregnancy tidbits,
3 comments:

Email ThisBlogThis!Share to TwitterShare to FacebookShare to Pinterest
Not unlike Beebee Coming, holiday phun, Jeffrey Effrey

We went for Karren and Bruce's 3 cheers wedding and loved it like it's nobody's business.

Grandma and grandpa McOmber's house that is a sacred spot. The smells of the town were killing my nostalgia button. There is no place quite like your childhood heaven.

I spent most of my time in Palo Alto as a rascally youth, but Jeff was a grown grad man student there with his own car. He knew the geography and restaurants, etc. so I was pleased to still introduce him to something I knew: The Village Cheese House. They

make epic sandwiches there. Something about growing up and revisiting old haunts: things get smaller. These sandwiches that my mom and aunt and grandparents would order for us were so huge I would think, "Are they crazy?? I can't even fit my mouth around this thing." I somehow thought I would still feel that way, but now... I could have maybe eaten two.

It was way too great to see everyone and celebrate the marriage of 2 more winners we know will have an awesome life, etc. Now back to the real world.

Email ThisBlogThis!Share to TwitterShare to FacebookShare to Pinterest
Not unlike Palo Alto

I am good with this weekend.
Conference was delicious. No matter where I am, I don't think I will ever prefer any General Conference viewing locale to my Uncle Robert and Aunt Kathryn's home in Farmington, UT, but I loved it in our home too. Conference in Farmington was a must for college student cousins, Utah dwellers, or visitors, and exploding with cozy company and perfect food. And really, I don't think I've ever resented anyone in my life so much as my brother Cam who was there this weekend while I was not. But, it was cloudy this morning, which was awesome. Isn't it so great to listen to our leaders whilst snuggled in a blanket? (People living in colder climates than CA: Hate me if you want for getting snuggly in 65 degree weather.) And hey, bonus: Jeff would randomly translate into French, no doubt testing the skill which he falsely declares has become "rusty". 2nd bonus: today in between sessions we had some friends over for some "brunch" which was way so totally awesome.
Yesterday Jeff took me on a day jaunt. He kept me guessing, and it was just one of those good things. It even included my first Yoo-Hoo beverage since August 1998 when we drove Elizabeth up to Provo for her freshman year of loose lips (ha!) and American Heritage at BYU. Activities like this that won't be quite so easily executed when we have a baby, oh I really do appreciate them.
Plus, at the end of our jaunt we went to Jerry's Dogs. Yes, I went to Jerry's Dogs. Apparently I don't look like the girl who goes there much. Jeff had said while we were in line he was going to get the chicken sausage. I wasn't listening when he actually ordered, but said, "I'll have the same thing" when it was my turn. The guy looked shocked and said with incredulity, "YOU want a BRATWURST?" Oh, uh, no.
And my house is clean and the grocer has been shopped and I got to rest.
So hey, that's why I'm good with this weekend.
2 comments:

Email ThisBlogThis!Share to TwitterShare to FacebookShare to Pinterest
Not unlike my religion, stuff 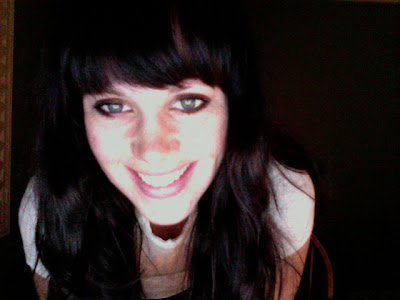 Email ThisBlogThis!Share to TwitterShare to FacebookShare to Pinterest
Not unlike stuff
Newer Posts Older Posts Home
Subscribe to: Posts (Atom)