Last night and during the day we had a Christmas movie marathon.

It started off with Sherlock Holmes. I didn't think it would be easy for them to go wrong with coal dusted England + RDJ + JL, and they didn't go wrong. I was pleased as punch! We ate Christmas candy during the first 20 minutes, too, until it was gone, and that added to the movie by way of sugar rushed enthusiasm.

Then we went home and after a while dad ran out to the still-open blockbuster, and retrieved fatal attraction. We just got a clearplay and praises be! With a bunch of people with differing views on the merits of R movies, this DVD player with a filter opens up a reservoir of cinematic options heretofore untapped.

Fatal attraction. Whoah. My mom's former stake president encouraged every married man to watch that movie. Just for fun. I will never at Glenn Close the same again (although after her role as the queen in hamlet she wasn't doin so great in my opinion), and sheesh! Michael Douglas really DOES look different pre-face lift(s)!

Then we watched Julie and Julia. Jeff had flown to Utah only hours before and he was the one who had really wanted to watch it. BUT I really liked it, really did, and I'll watch it again in the name of lurve.

Now we are off to the mall. My office is just across the hands bridge at south coast plaza so we are working the parking thang. Transponder to the parking lot rescue!

Email ThisBlogThis!Share to TwitterShare to FacebookShare to Pinterest
Not unlike feature films, holiday phun 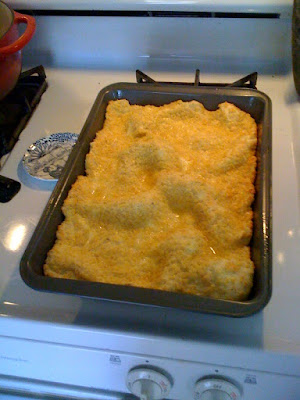 Sarah and Harry made a crater-ized German Pancake that was not to be ignored. 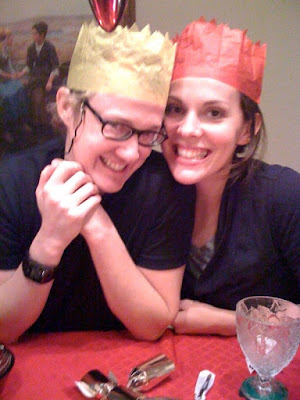 And they feel very remorseful about the fact that my cheeks got 3 sizes chubbier after eating it. 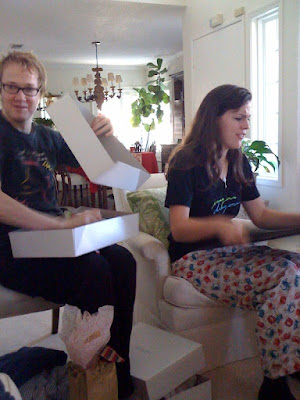 And this is what they look like opening presents! Can you believe it?? 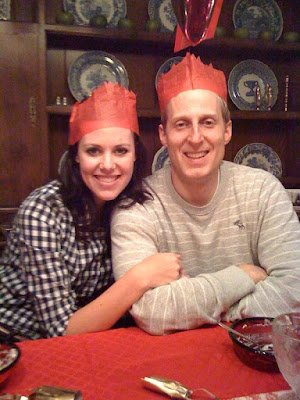 We had Christmas poppers on the Eve of the day, and the poppers come with crowns. 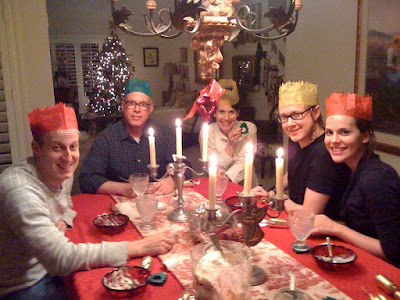 And we all looked CUTE. 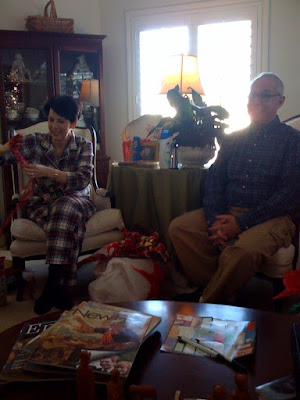 And my dear Mumsy and Popsy looting.
We got to talk to Camer Christmas Eve and he has a Spanish accent. He sounds good though, and when we talk to him again on Mother's Day he'll only have 2 weeks left. We're all hippety hopped up on that.
Merry Christmas!
1 comment:

Email ThisBlogThis!Share to TwitterShare to FacebookShare to Pinterest
Not unlike holiday phun

Merry Christmas from Us to You 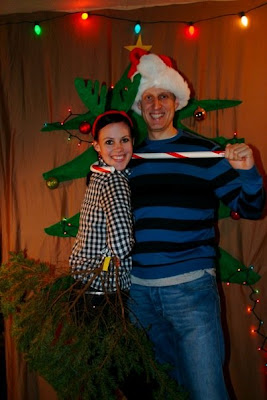 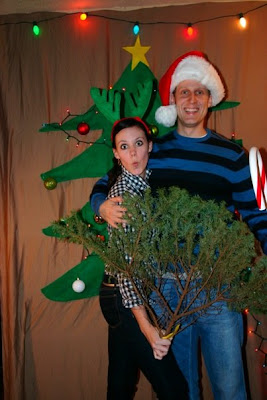 And a Happy New Year!
A few years ago I got an actual card in the mail from people who were engaged and it stressed me out. Blog card doesn't.
1 comment:

Email ThisBlogThis!Share to TwitterShare to FacebookShare to Pinterest
Not unlike holiday phun

Bits for a Sunday Ev'n

I have a kink in my neck and writer's cramp.

I love my invitations.

They are my favorite thing.

3 days of work this week.

Sarah and Harry are in town and they're a hoot.

I'm so glad I'm marrying Jeff. I believe in Jeff and Meredith.

It's in a book Sarah's reading.

I have a new phone number. Merged plans with Jeff. No turning back now. To keep his discount he got in law school, I had to switch to his "network" of 650 area code, in Palo Alto. Do we live in Palo Alto? Nope! Do we have any plans to live in Palo Alto? Nope! Oh well! When I was a wee babe my family and I lived in Palo Alto, so I sort of consider it legit. And if Sarah or Harry or Aunt Susan or Uncle Bryant ever fancied a chat, they could call me from a land line with ease.

I lost all my sidebar stuff while switching around templates for this here blog. Woops.

#1 annoyance of all time: People who chew with their mouth open or eat with such a frenzy it seems they've not been fed in 3 years. Drives me crazy.

Confession: I made a new married email address before I got engaged. I had a hunch Jeff was going to be my guy. I won't say how long ago I made it, but merzyhayes@gmail.com is taken!

And a Merry Christmas week!
3 comments:

Email ThisBlogThis!Share to TwitterShare to FacebookShare to Pinterest
Not unlike Madame Hayes, stuff

Bon anniversaire to my Mumsy and Pop

Yesterday. Sorry I am quite late.

Boy oh boy I sure am glad you got married 31 years ago! You could say my life depended upon that beautiful day! And I love you both. Sorry about the picture.

For more, check the snap-snap man himself, Mike Cunningham.
I love my life. 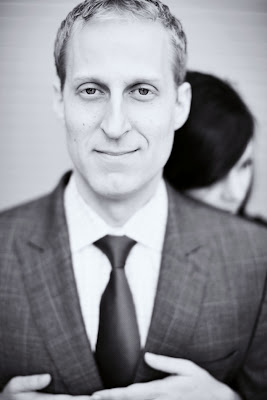 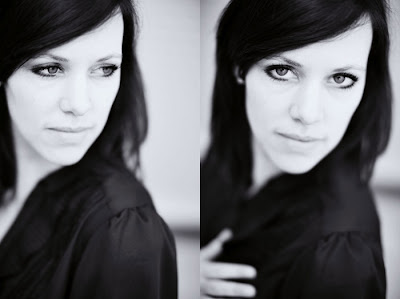 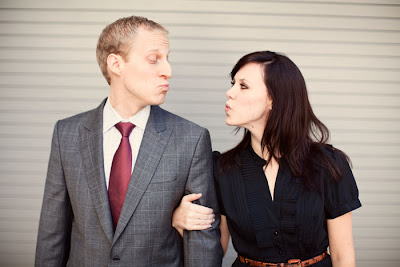 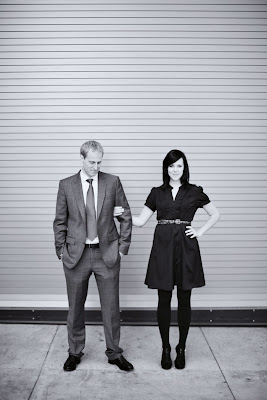 Email ThisBlogThis!Share to TwitterShare to FacebookShare to Pinterest
Not unlike Madame Hayes

One of these days I'll blog about something else.

There are lots of good things about dating for a long time.

Last Christmas jeff and I had buckets of good times shopping for our families and while I didn't allow myself to be a complete ninny girl and plan for the entire future, I did permit myself to think, "I hope we do this again together next year!"

We are at nordstrom rack picking out his suit and just finished getting a couple presents for siblings and I can definitely say it's even more fun this time. Womp womp! 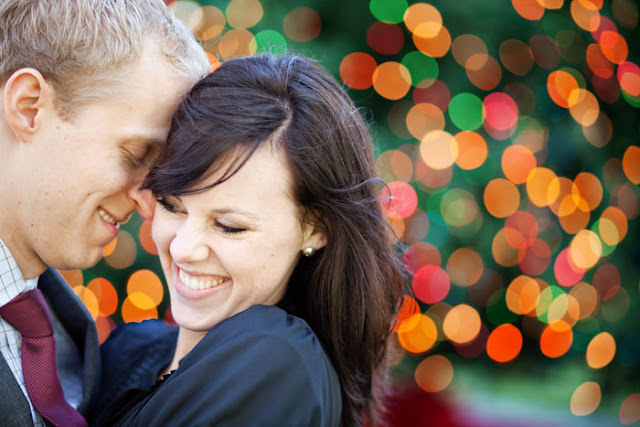 More on this later.

But happy girl am I.
9 comments:

Email ThisBlogThis!Share to TwitterShare to FacebookShare to Pinterest
Not unlike Madame Hayes

Guess whose house is the last one on the block to be decorated.

I WILL, however, in the spirit of Christmas, gluttonous light, holly ho ho, shed some wisdom: If you're feelin hungry and cheap/poor, hop over to a take-out spot right before they close. Friday night and tonight we were able to score some extras and freebies by popping into Pat and Oscars and then Baja Fresh -- willy nilly. I would like to think my winning smile and magnetic personality earned me those things but I'm more convinced in its being the product of "Oh, uh, we're closing up and giving them this will save me an extra trip to the dumpsters in the chilled back parking lot."

The only downside: the freebie breadshticks at Pat and Oscars actually turn your innards into solids. The damage has been known to be instantaneous.

I am doing a late Thanksgiving Tangent now. Here goes....

I'm thankful for (in no particular order):

- Diet Coke (see that's why I had to put "in no particular order" so you guys will never know if I'm more grateful for this than all other things in my life.)
- Christmas and all it entails, and that I know it's all so very real
- A Mother and a Mother-in-Law-to-Be who are so efficient and clever they dare to throw together a wedding in exactly 2 months
- www.jcrew.com -- it is nice to just look sometimes.
- the fact that Cameron comes home in less than 6 months
- Razors
- My dear, silly, plucky family
- Pals and comrades that make me chuckle
- the universe isn't asking me to personally deal with Levi Johnston
- Sugar Free hot chocolate provided at my office
- the nice man who put on my spare tire when a nail shoved into my tire totally ruined its wheeling potential
- An eternal boo that charms me to death on a daily basis
- and a partriage in a pear treeeeeeee
3 comments:

Email ThisBlogThis!Share to TwitterShare to FacebookShare to Pinterest
Not unlike Axis of Awesome, holiday phun, stuff

I think I'm getting sick.
Tiger Woods, David Letterman, what is wrong with you???
And you know that Owl City song? Does he really sing something about getting many hugs from many lightening bugs? Does KROQ reeeeally play it??? Are you kidding me? My preschool didn't even sing about such things.
Goodnight.
* It seemed like a good time to start using nonsense words.
1 comment:

Email ThisBlogThis!Share to TwitterShare to FacebookShare to Pinterest
Not unlike stuff

Thanksgiving was pretty terrific. I snuggled small children to whom I shall be "Aunt Mer", I ate way too many carbs, I saw pictures of what my FH (Future Husband) looked like as a wee one, 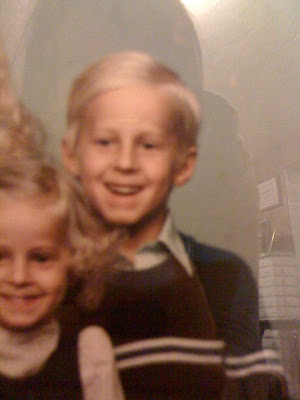 watched a movie in a home theater that could beat up your in-law's home theater, got to know everyone, planned what we could, and let the engagement soak in. Odd things that made it feel more real somehow: 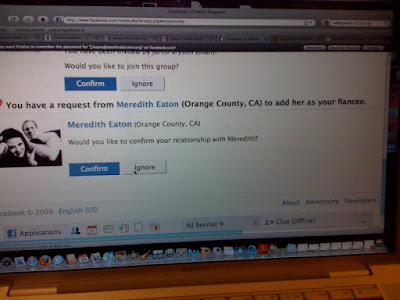 That one had us laughing pretty hard. After Jeff hit "Confirm" it said, "You are now in a relationship with Meredith Eaton. You have no more relationship requests."

2. Receiving an assignment in the sibling present swap (and handing one out on the Eaton side as well). Erica and Robert and Sarah and Harry better be nice to us unless they've been craving chunks of coal to warm their Christmas hearts!

3. And eh, calling the Newport Beach LDS Temple to see if they had sealing availability on January 23rd at noon was sort of a trip, you know, kind of.


* I don't think it's possible to explain how much I love Nat King Cole's Christmas album. It says all things good to me. Growing up we'd prance around to Jonny Mathis, The Chieftans, Art Garfunkle, T. Bone Burnett, Jodi Collins, Harry Connick Jr., Mariah Carey, and many more, but there's almost nothing I'd rather listen to than Nat. The night we got engaged he sang to me the whole way home. He also sang to us while we drove to get his finger sized for his Man Bling in Salt Lake. Nat King Cole Christmas is to me what snow is to Lorelai Gilmore.

* By the way, I have grandmothers anew! My grandparents passed away a long time ago, and I have missed them. I now have 2 new grandmas. Woot woot! I didn't get to spend much time with one, but the other reminds me in looks and winning personality of Deborah Kerr in An Affair to Remember. Which, by the way, if you haven't seen it, after you smack yourself upside the hayd, go rent it and watch it until you know it by heart. It was really fun to call someone Grandma again; she's as sweet as can be.