Jude doesn't care for his costume. 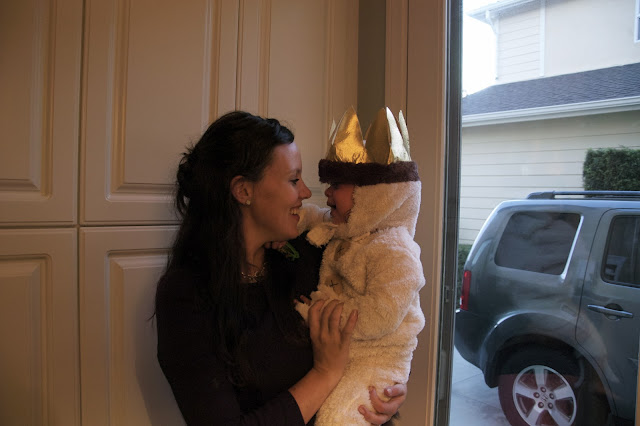 But we think it's really cute on him.
P.S. At the ward Trunk or Treat we went to about 2 minutes after this picture, he kept the hat on (the real offender) for about 10 minutes as long as he was double-fisting the candy.  Pictures to come; 'tis Halloween week!
2 comments:

Email ThisBlogThis!Share to TwitterShare to FacebookShare to Pinterest
Not unlike holiday phun, Jude


- So this is one for the Nature v. Nurture argument: For a while now, Jude loves cars like I love Sonic beverages.  I keep a small supply of Hot Wheels for rainy days, and he's already got access to quite a few cars.  Jude greets each one as if it were its own beautiful Princess Diana engagement ring.  Guided by his slightly cushy hand, "vroom vroom" sounds included, they make tracks all over everything.  The road is me, his own body, the floor, the walls, nothing is off limits.   I maybe would have done this if I were more on top of it, but I had never, not once, shown him how to steer a car around and make an engine noise. And to my knowledge, no one else had either.  He just started doing it one day.  Also in the engine department, whenever we see a big truck drive by, or happen upon a construction site (the Costco parking lot is a doosy), he goes berserk.  I think I'll put this one on Nature.

- Kisses have morphed from open mouthed slobbers to puckers and ! the real thing.  He will often accompany these by a full on hug around the neck and pats our arms or backs.  We are putty.  It's probably the most enchanting thing that's ever happened.  These kisses are also applied liberally to "owies" that may or may not actually be owies.  Jude also is working it with his lady friends Violet and Lyla; yesterday he and Violet had a "I'll come 90, you come 10" kiss on the lips.  Quite the Lothario.

- Jude goes up to kids that are 5 seconds younger than him and, with his most patronizing smile, gives them tickles.  He looks at them afterwards like, "Yeah, I know your life just hit an all-time high.  Don't thank me, I'm just a nice guy trying to increase the world's morale."  He also wants to share his food with everyone (but also assumes everyone wants to return the favor).

- He copies us doing random things that crack us up.  I make green smoothies every morning.  Our blender is not the most efficient item to ever grace a counter top, and I usually have to shake it around, then stop it, open the lid, hack away at chunks with a fork, and then put the lid back on and shake the running blender some more.  Jude is over trying to push all the blender buttons, but he does want to copy cat my shaking the blender and popping the lid off and on.  I'm learning to be more patient with this; sometimes I just wish he'd go play with his toys instead of wanting to follow my every culinary move.
If we are going up the stairs and he stops to lollygag, I'd pat him on the bum a couple of times to remind him of the course we were on.  I guess it had become a somewhat regular thing because last week as we traveled upstairs he stopped, turned, patted himself on the bum, and looked at me like, "We're good?"  There are more copy-cats but I can't think of them at the moment....

- My son has a soft spot for the underdog (it seems).  On a glorious rainy day a couple of weeks ago, I took him to the "playground" (more like germ fest) at the mall to take the place of the watery park.  Jude was playing with a bead maze on the wall next to a couple of other kids his size.  Kid A was getting jealous of the amount of space Kid B was taking up, and he shoved Kid B to the ground.  Jude saw this and then shoved Kid A to the ground.  Was he just joining in the shoving?  Was he protecting Kid B?  We'll never know.  But Kid B's mom happened to be sitting right next to me and was grateful.  Kid A was removed hastily from the playground by a very mortified mother.

- When I sing him songs at bedtime, he'll chime in with the occasional "Waaa waaaa waaaaaa". 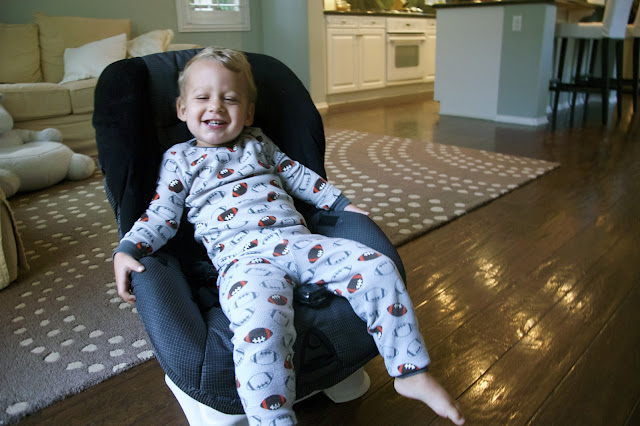 - We've been spending our mornings at a park by our house that is perfect for Jude at this age.  Compared to the other parks we've been going to, the structure is lower, there aren't as many gaps for Jude to fall through, but still plenty of things for him to get excited about. It also backs into a big grassy baseball field that Jude can run down screaming for joy.

This is the park that has opened up the nanny pocket of our neighborhood; I had no idea there were so many!  I'm getting to know them and the nanny world.  There's some drama; nannies stealing jobs, etc.  They are very sweet and affectionate with their little tots and it makes me happy.  They don't know yet that I espeak the Espanish and understand what they're saying to each other.  Thankfully they haven't commented yet on how slouchy I am dressed and whether or not I smell sweaty (we've been going right after family jog in the morning).

Along with the nannies, of course, come kids.  A lot of them are about Jude's age, which I love.  Some of these little kids I want to eat up.  They are so cute and lovey (and good sharers with toys).  A couple of the kids I think, "Well, at least you have a Mom who loves you."


- Whenever a Presidential campaign comes around, I usually smirk at the people that put bumper stickers on their cars.  I smirk AND laugh when, after the elections are over, the stickers for the losing parties are still on cars.  I am usually not in favor of bumper stickers of any kind; it usually ends up looking junky.  I also have always removed the dealerships' license plate frames from any car I've ever driven.  I feel like it makes me a marketing pawn when I've already given them an arm and a leg.  However, for the next few weeks I'll have this gem on my back window: 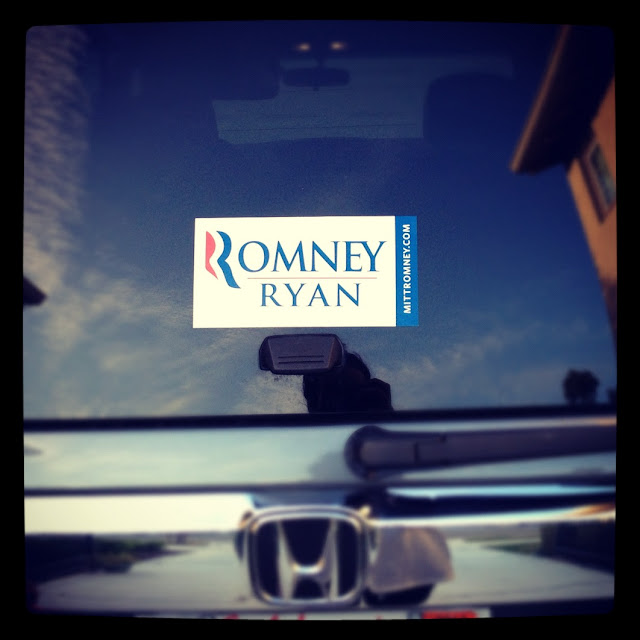 I guess I feel strongly enough about this election.  When Obama got elected I thought, "Well, I didn't vote for him, but I'll be his #1 fan if he gets the job done."  He didn't.
2 comments:

Email ThisBlogThis!Share to TwitterShare to FacebookShare to Pinterest
Not unlike Jude, politics, stuff

2 Forces to be Reckoned With 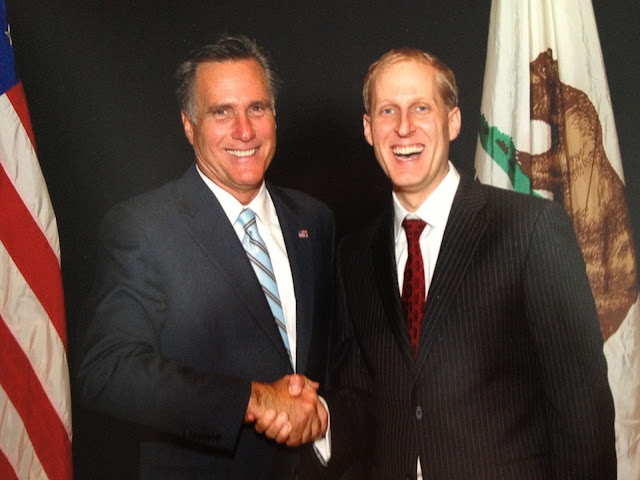 I love them both (in different ways).
2 comments:

Email ThisBlogThis!Share to TwitterShare to FacebookShare to Pinterest
Not unlike Jeffrey Effrey, politics

While I'm all hopped up on the inspirational messages of General Conference, I'm going to jot down a few things I love about Jude these days:

Jude is hilarious.  He's figured out what to do when he's getting his picture taken, and within seconds will bust out his biggest, cheesiest smile (see below).

He's going to rip my house to shreds.

He's finally learning how to give real kisses.

He calls himself "baby" and sometimes a version of "Juju" that probably only we would recognize.

He's an OK eater.  Harry asked me last week what he eats.  Hmmm -- the regulars are Greek yogurt, hummus, hot dogs, milk, green juice, grapes, strawberries, eggs, peas, and a few bites of whatever we're eating for dinner.  He does not usually care much about dinner.  Anyway, I'm trying to curb the snacking, period, to make meals more complete.

I think Jude was a little weirded out today that Jeff and I were both home but we didn't really go anywhere till 3pm because of General Conference.  Afterward we went to walk a path that runs along the San Clemente beach.  Beautiful.  Pictures may surface another day.  We thoroughly exhausted him. We saw a few dogs and he lit up every time.

He used to, if he got hurt, want me to hold him but would be mad at me like it was my fault he tripped and bonked his head.  That phase is over and he seems to have realized that that isn't the way I roll.

He wants to do everything by himself and do everything the way we do it.  He seems to think the high chair is condescending these days.  Brushing teeth was a battle until he grabbed my toothbrush off the counter one morning; now that he uses an adult toothbrush he's much more amenable to the idea.

Tonight he bonked his head on the kitchen island with quite a bit of force.  It was tragic and he's got a little bump.  He was, of course, wailing and then some music came on in the background.  Still horribly upset, through his wails he started dancing in my arms.  Music is his drug.

That's all I can think of for now.  Peace. 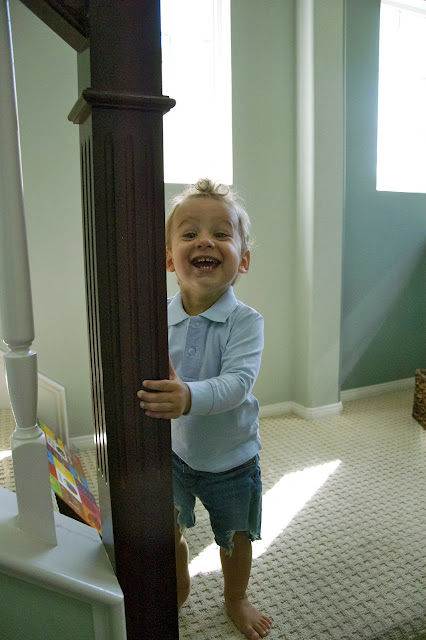 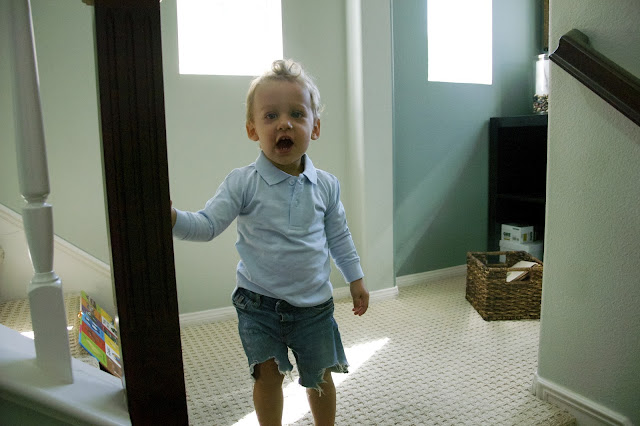 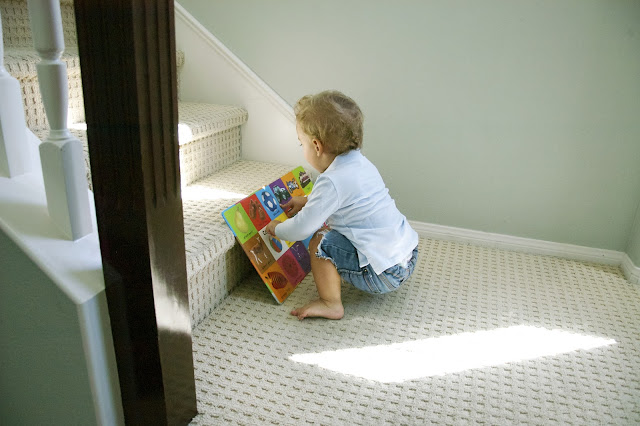 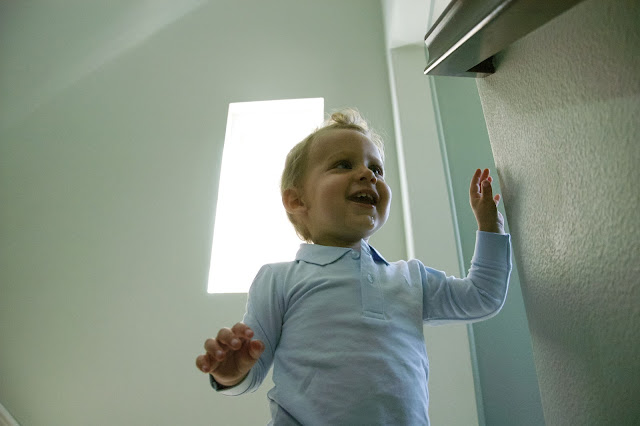 Email ThisBlogThis!Share to TwitterShare to FacebookShare to Pinterest
Not unlike Jude, my religion

The Most Appreciated Season Change of All Time 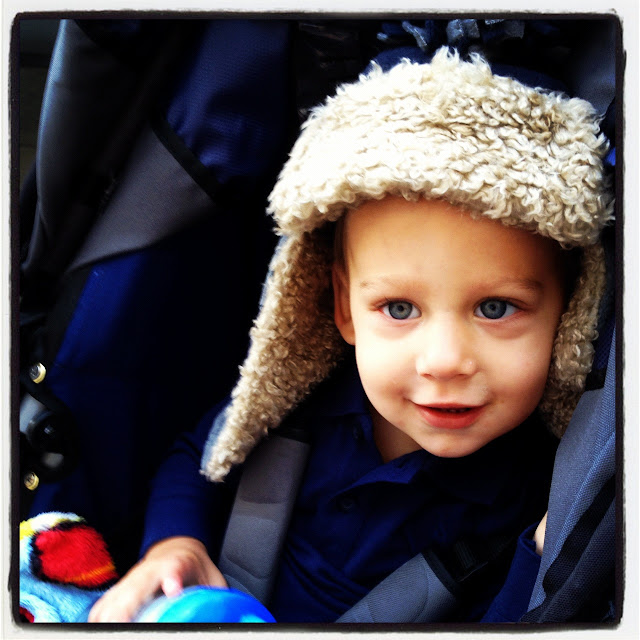 A few days ago, when the mid-day temperatures were in the high 70s, I wanted to cry, do a dance (which would have looked awesome with my stomach protrusion), give every man, woman and child in a 2 mile radius a hug, and drop to my knees to offer a prayer of thanksgiving!  And then, this morning as we drove to McDonalds for a post-family-jog breakfast, and the air was wet and crisp, I started singing songs.  I don't really know why the infernal weather was getting me so down, other than the fact that my body is already operating at a much higher temperature for obvious reasons, and my son needs to be outside every day (and wants to be out there from the moment we lift him from his crib in the morning to the time we put him back in at night).  If I wasn't out there I felt like a bad mom.  If I was out there I felt like I was going to keel over.  You may be right, I may be crazy.  But, it just may be a lunatic you're looking for.

Hopefully the 90s and 100s are over until next year when I'm not pregnant.  I can smell fall, I'm making soup tomorrow, a pumpkin candle burns, and I'm on Cloud 22.
No comments:

Email ThisBlogThis!Share to TwitterShare to FacebookShare to Pinterest
Not unlike Beebee Coming, Jude, Ladera Land

Time for a purging of my phone's blurry pictures.  Does my life revolve around my boys or does my life revolve around my boys?  Speaking of my 2-almost-3 boys, it occurred to me the other day that I am going to be very outnumbered over here.  I'll be living with 3 other people and not a one of them is going to be a girl.  As much as I am looking forward to having another squishy boy, I quickly whipped into the phase of "DON'T FORGET, I MAY LOVE YOU A LOT BUT I'M STILL A GIRL", and attempting to preclude myself from becoming a tenant in a world of excessive boogers/toots/bathroom-and-bodily-waste TMI.  Some mothers of plural boys have told me it's not possible.  I'm still going to try.

Email ThisBlogThis!Share to TwitterShare to FacebookShare to Pinterest
Not unlike Friends and Lovers, Jeffrey Effrey, Jude, stuff i do, the stuff of life
Newer Posts Older Posts Home
Subscribe to: Posts (Atom)