I was a lucky duck and in late September, I went on a "Girls' Weekend".  My friends Lisa, Amber, Sarah and I spent (almost) a weekend at Sarah's in-laws' beach-side condo in San Clemente.

We got there Friday night, went to dinner, and then back at the condo stayed up late applying face masks and eating the best chocolate chip cookies, dough prepared for us by Sarah's husband Dave.  Seriously?  This family set us up.  Anyway then I slept like a rock and slept in.  We lazed about.  We debated a few activities and ended up within spitting distance of my house: The Mission Viejo Mall.  Then we got our nails did and went back to the condo for more laziness.  By the end of the evening we were all sitting on the balcony, and instead of staring at the beautiful Pacific that was before us, we were on our phones looking at old archived pictures of our kids.  Lots of declarations of "oh I can't believe how small he was!" were heard.

I was still nursing so I went home Saturday night.  It was great to get away, and great to see my 3 babies again.  I never knew how much I would appreciate the time away until I had it.  I love my kids, but a day without anyone throwing a tantrum or demanding I fill up a sippy RIGHTAWAYWHY ISN'TITALREADYFULLIASKEDYOUONESECONDAGO or throwing up on me was kinda nice. Plus I love my girlfriends.  They make me laugh, don't judge me, encourage me, etc. so obviously I'm a lucky girl.
1 comment:

Try to get them back to sleep.
Give up.
The boys jump on mom and dad's bed and give a few snuggles (at least the boys are ecstatically joyful in the morning).
Downstairs.
Jeff goes running.
Breakfast.
Lower Graham's crib to the lowest level.
Jeff comes back, gets ready for work.
Graham's got a stinky bum to change.
Jeff goes to work.
I go running with the boys in the BOB.
Graham falls asleep in the stroller, move him to his crib once we're home.
Take a shower while Jude destroys my bedroom (way more fun than the iPad).
Get dressed and put on some mascara.
Read books and build things with Jude and his Duplos.
Jude wants snacks.
Graham wakes up.
Lunch.
Speech therapy.
On the way to speech therapy Jude tells me about fire trucks and counts to ten "one two free nine ten six!"
Jude falls asleep in the car on the way home from Speech (Hallelujah!!!)
Giddily and gingerly remove Jude from his car seat to put him in his bed.
He wakes up right as I'm closing his curtains.
I say "goodnight!" and escape.
He does not fall back to sleep as I'd hoped.
I let him cry for a few minutes but I need to go get groceries anyway so I open the door to his room.
He says matter-of-factly, "I'm sad."
Getting out of a nap makes him happy.
We go to 2 grocery stores.
Jude wants to eat and buy everything he sees.
Get all the ingredients for chicken noodle soup for the Woods because they just had Baby Luke.
Get home.
Jude is throwing a tantrum because we did not go to Kids Club at the gym (little does he know I froze my pass).
Realize I forgot the egg for the noodles.
Text neighbor.
She's got an egg.
I make dinner while the boys play so well together I wish I could sit down with them.
Graham goes down for his afternoon nap despite the fact that Jude bypasses the gate, follows me upstairs and is making explosion noises.
Jude and I play chase and watch a snippet of Cars before it's time to take dinner to the Woods'.
Wake up Graham, load it all up in the car.
Graham blows out his diaper on the way to the Woods'.
Jude tells me Amber has pretty hair and he loves her.
Get to the Woods'.
Visit with them for a bit.
Go to the pediatrician so Jude can get his flu shot.
Jude doesn't even flinch over the shot.
Go home.
Eat dinner.
Diapers.
Jammies.
Brush teeth.
30 minutes of Cars.
Shut down Jude's attempts at negotiating bedtime.
Put Jude's clean sheets on his bed while the boys try to dissemble the vacuum.
Read bedtime books.
Family prayer minus Jeff who's working late.
Night night songs.
Hugs.
Kisses.
I love yous.
I eat 2 cookies.
I want more cookies.
I polish off the last couple bites of Jude's dinner.
Start working on the stuff I'm doing 3-10 hours a week for my friend's mom's non-profit.
Take a break to go over the day's happenings because I'm wondering why I'm wiped out.
Tadaaaa.
The End.
3 comments:

Email ThisBlogThis!Share to TwitterShare to FacebookShare to Pinterest
Not unlike Mama Mia 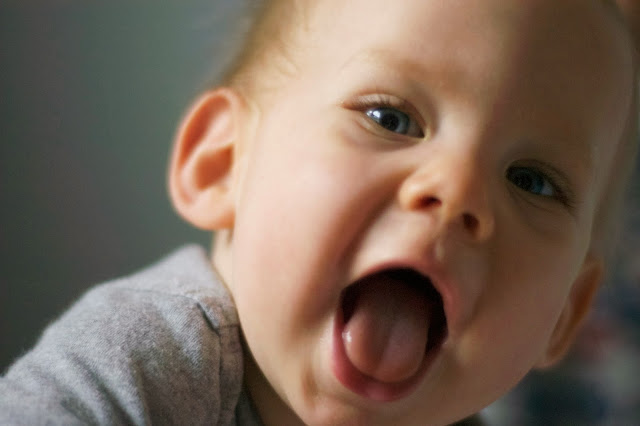 He began crawling a few weeks ago, and is pleased as punch with the freedom.  Jude had to learn to keep his most prized possessions off the floor. 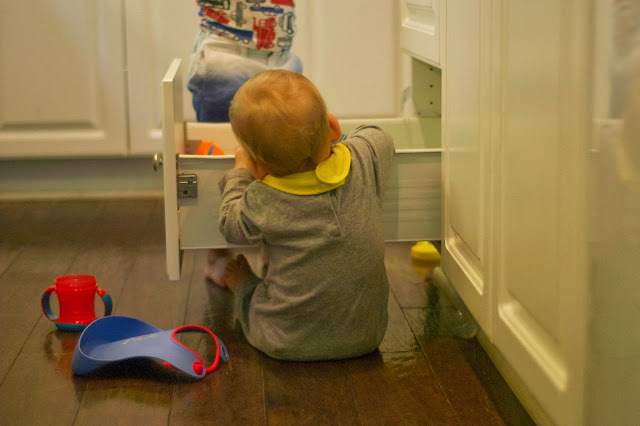 He is into everything, but this is less stressful the 2nd time around.  He also, unlike infant Jude, has a live-in buddy to play with, thus making "stuff" in the house less enticing most of the time.

He's swatting, jabbering "dadada mamama bababa", pulling himself up on things, putting all objects into his mouth, attacking us, chewing on our faces, and loving everything. 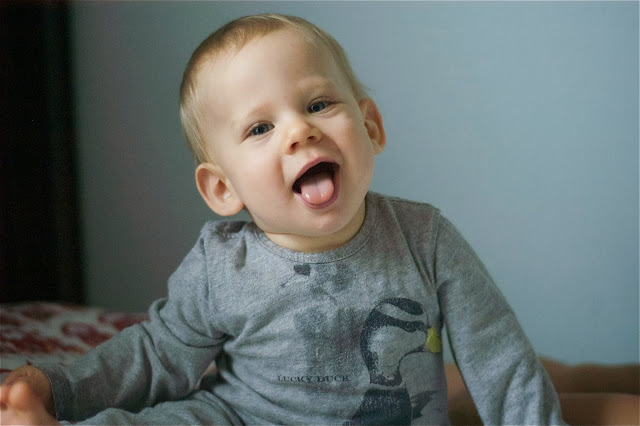 Cutting his first 2 teeth has turned him into a drool machine.  I change his saturated bibs about 5 times a day.
A note about his drool soaked outfit in these pictures: I had been thinking about how much I wished my grandparents had been alive to meet my kids.  They would've had a ball.  Then I went to the mall because Graham's been growing at a faster rate than Jude did, so a lot of the clothes I'd saved for Graham weren't seasonally aligned.  (Or, since Graham's currently the size Jude was as a 1 year old, and Jude beat TO SMITHEREENS most of his clothes from that point on, I only have church clothes and pajamas left for Graham.  You would not believe how much Jude wore his clothes to pulverization death.  That kid plays hard.)
Anyway I was in Baby Gap hoping for a couple of sale items to keep Graham clothed and the first thing I saw was this one piece thing that says "Lucky Duck"with a cute non-cheesy duck on it.  If you knew my Grandmother you know she would always say "You are a lucky…." and it was your job to finish "duck!"  I felt like the fact that there was one on clearance in Graham's size, plus another one to grow into, it was surely Merial McOmber's doing from the other side.  I snatched them up and he wears it all the time (he's already in the larger one). I think every time I pull it over his head and snap it up she's giving her great-grandson a tight hug. 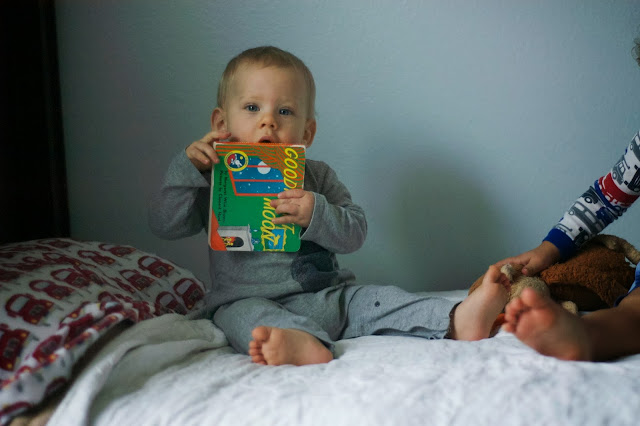 He doesn't realize it, but he has shown Jude he can fight back a bit.  Graham loves to grab hair, and when he goes for Jude's, Jude shrinks and covers his head with his hands and shrieks/whimpers, "NO GAMMY NO!!!" All the while Graham has this completely innocent, elated look on his face.  The scenario makes me laugh, and then I reassure Jude that Graham isn't trying to hurt him.

I can't keep him full.

He's a big spitter-upper.  I weaned him about a month ago.  A few weeks ago he was spitting up all day.  The doc says he's fine, still gaining weight and no acid reflux or anything, he's just "spitty."   We switched formula and it helps a little, but I do A LOT of laundry.  My poor overworked washing machine and dryer and my poor laundry baskets that are constantly full of folded and unfolded clothes.

Anyway, Graham makes us feel like a million bucks every day.  I still get emotional talking about what a blessing he is.  We.  Love.  Him.

Email ThisBlogThis!Share to TwitterShare to FacebookShare to Pinterest
Not unlike Graham
Newer Posts Older Posts Home
Subscribe to: Posts (Atom)